Earlier this month the Los Angeles Lakers and the Utah Jazz came to Hawaii to compete in two NBA preseason exhibition games.

In front of a sold out crowd of loving sports fans at the Stan Sheriff Center, the Lakers and Jazz battled it out for two days in order to prepare for the upcoming NBA season.

Now I’m not a huge basketball watcher; I’m more of a football person (Go Pack Go!). But given how far Hawaii is from the mainland and the closest thing we have to a professional team is the Rainbow Warrior Football team (Oh we’ll get to that soon enough), it was really cool that two big-name organizations would take the time to come to Hawaii to compete even if it was only an exhibition. 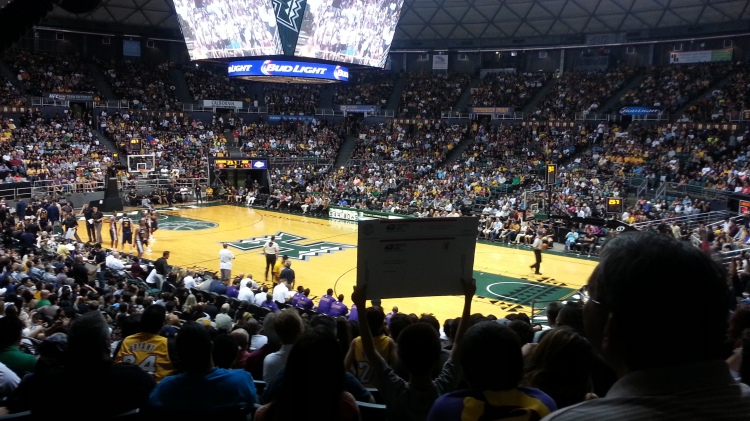 The Lakers in particular hadn’t come down to Hawaii for preseason in eight years so I’m sure it was a very special occasion for the many, many, many Laker fans in the state who probably never got the chance to see them live.

Obviously the big draw of the entire trip was Kobe Bryant. Every time his name was announced the crowds would erupt so loudly, I swear I could feel the ground vibrating beneath my feet and with good reason. People here love Kobe. Everywhere I looked there were more Kobe Bryant jerseys than the other players, which proves how marketable he is to the franchise. Even during the post-game interviews there was more of a scrum to get an interview with Kobe than any of the other players. It was pretty wild.

Like a lot of people, I’d never been to a professional NBA game before so I was very fortunate that my job allows me to go to potentially once-in-a-career events. Sure, I had to spend most of the game standing up and moving around, shooting the crowd and the players but if that’s my biggest complaint, I’m really grasping at straws.

I even saw the Laker Girls and yes, they are just as beautiful in real life.

What I’m trying to say is that for a casual basketball observer like myself, the Lakers and Jazz coming to Hawaii was a tremendous amount of fun. The action was fast, the crowd was loud, and the entire experience left me wishing we had a professional team in Hawaii.

Does that now make me a Laker or Jazz fan?

But I do have a much better appreciation for professional sports and how much they mean to people, especially in places aren’t fortunate enough to have a professional team.

I hope they come back next year if only so I can watch another NBA game live.